Good Shepherd is a Christian family committed
to responding to our Lord's love and command to
"make disciples of all nations" by sharing the
Good News of Christ through our words and actions.

LEARN MORE ABOUT US

NOTES: Please remember our shut-in members during this time. It means so much to them to know that we are thinking of them when we cannot be with them. Cards, letters, and gifts are appropriate to send during this time.

PRAYERS FOR OUR MILITARY

Sean DeBruzzi - Army National Guard Test pilot, son of the DeBruzzi’s has returned home after being deployed to Iraq as a helicopter pilot.

SUNDAY SCHOOL: The Neighborhood! We love because He first loved us! 1 John 4:19
Week Two. The gift of God’s name! We can call on him in every trouble, pray, praise and
give thanks. Join us as we learn of Jesus, through the Good Samaritan. In mercy, He
heals us! He gives us His water. We will share the love of Jesus as we deliver water to
the park and play, growing together as His family! Please call the church office to REGISTER at (815) 469-2549.

SUMMER WORSHIP ON WEDNESDAYS (W.O.W.): will be available for those who
miss worship on Sunday. Services will be every Wednesday evening beginning at 6:15
p.m., starting on June 2nd and will continue through the summer. Each Wednesday uses
the previous Sunday’s sermon and hymns in a more relaxed and simpler format. Holy
Communion will be celebrated on the third Worship on Wednesday of the month. You
don’t need to take a vacation from worship this summer. Worship On Wednesdays.

2021 SERMON/WORSHIP SERIES: ROUTE 66 : This series is an epic, one-year road trip through the Bible. Route 66 was originally a highway that became one of the most famous roads in the United States. It ran from Chicago to Santa Monica, California from 1926 until 1985. For many years it served as the primary route for those who were migrating west looking for a better life. In a similar way, our journey through the 66 books of the Bible is the route to a better life. More than that, to life itself because it leads us to Jesus Christ. 48 of the most important stops on the way through the Bible have already been mapped out. We won’t have much time to spend in any one place. We have places to go and people to meet.

SUNDAY MORNING ADULT BIBLE STUDY: is getting weird. This summer we are going
to study the Top-Ten WEIRD Bible stories. You know about Daniel and the lion’s den,
but how about the teenager who fell out of a window and died than was raised to life?
Bible Study meets in the fellowship hall from 9:30-10:30. 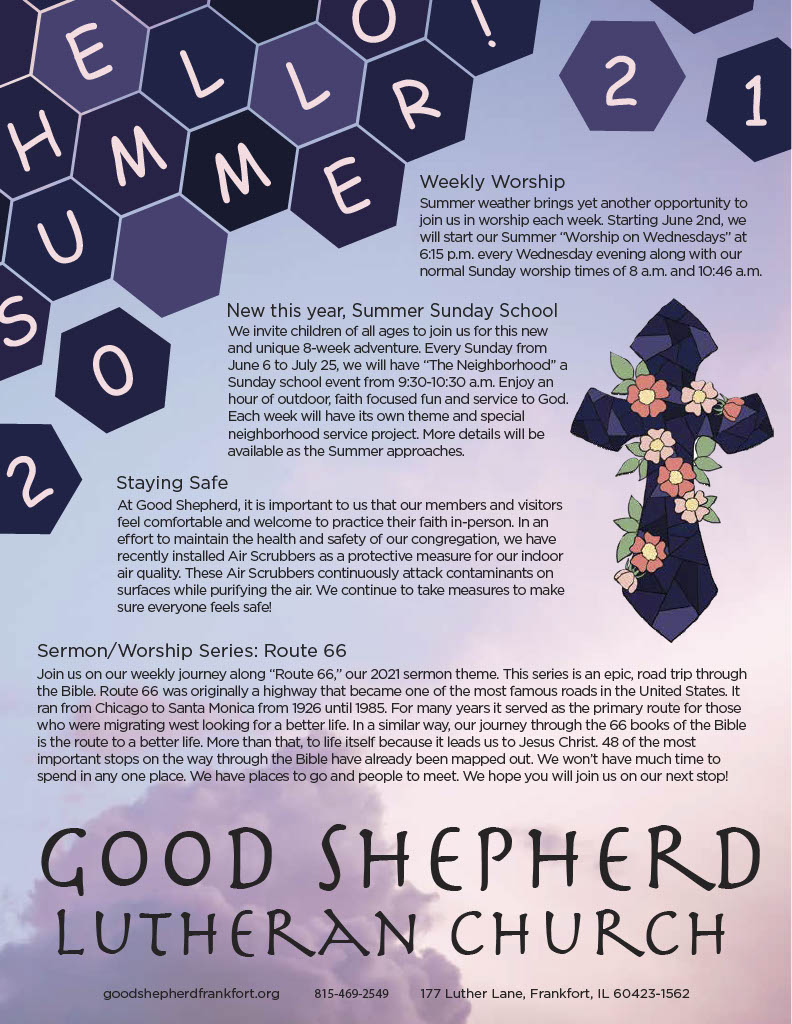 Directories can be accessed by signing in